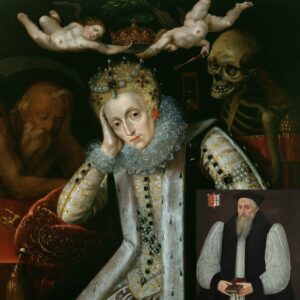 In 1578, Elizabeth I was suffering badly with toothache, and really needed the problem tooth extracted. However, she was afraid of having the tooth removed due to the pain involved. That’s when John Aylmer, Bishop of London, decided to help his queen, making quite a sacrifice – rather him than me!

Here’s the story from John Strype’s “Historical collections of the life and acts of the Right Rev. Father in God, John Aylmer: Lord Bishop of London, in the reign of Queen Elizabeth”:

“I will not omit a tradition that goeth in the family of the Aylmers, of the Bishop’s stout heart in a pretty odd instance, namely, in causing one of his teeth to be drawn once in the Queen’s presence, for the better encouraging her to undergo that present pain for her own quiet and ease afterwards : and indeed I find she was once so disquieted with the toothach, that it gave a concern to all the Court.

It was in the month of December 1578, when she was so excessively tormented with that distemper, that she had no intermission day nor night, and it forced her to pass whole nights without taking any rest ; and came to that extremity, that her physicians were called in and consulted. These differed among themselves as to the cause of the distemper, and what means were properest to be used. There was then an outlandish physician of some note, it seems, for giving ease in this anguish, whose name was John Anthony Fenotus ; him the Lords of the Council sent for, and required, or rather commanded him to give his advice in writing, to procure the Queen ease. Whereupon he wrote a long Latin letter which I have seen : first, disabling himself to come after such great physicians ; and then prescribing divers remedies. But in case the tooth were hollow, his advice then was, that when all was done, it was best to have it drawn out, though with the incurring some short pain. But if her Majesty could not submit to such chirurgical instruments, (which it seems he had heard something of the Queen’s abhorrence of,) then he advised that the juice of chelidonius major might be put into the tooth, and so stopped with wax, that none of it might fall upon the sound parts ; whereby the tooth would in a short time be so loose that it might be pulled out by the fingers : or the root of it might be rubbed upon the tooth, and it would have the same effect. But in short, the pulling it out was esteemed by all the safest way ; to which, however, the Queen, as was said, was very averse, as afraid of the acute pain that accompanied it.

And now it seems it was that the Bishop of London being present, a man of high courage, persuaded her that the pain was not so much, and not at all to be dreaded ; and to convince her thereof told her, she should have a sensible experiment of it in himself, though he were an old man, and had not many teeth to spare ; and immediately bade the surgeon come and pull out one of his teeth, (perhaps a decayed one,) in her Majesty s presence. Which accordingly was done : and she was hereby encouraged to submit to the operation herself.”

The Burnings of Ridley and Latimer