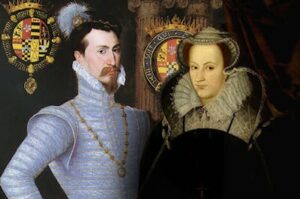 On this day in history, 29th September 1564, Robert Dudley was made Earl of Leicester, an earldom which had been planned earlier in the year to make him more acceptable as a bridegroom to Mary Queen of Scots. Yes, in the Spring of 1563, Elizabeth I offered her favourite, and the man she loved, Robert Dudley, to the Scottish Queen. How bizarre!

When she first spoke to William Maitland of Lethington, the Scottish Ambassador, about this idea, he laughed it off and then asked why Elizabeth herself did not marry Dudley and that way she could leave both her husband and kingdom to Mary Queen of Scots!

Elizabeth’s chief advisor, William Cecil, supported the plan, after all, it killed two birds with one stone: it got rid of the troublesome Dudley and it formed an alliance with Scotland. Cecil wrote to Maitland in praise of Dudley but Maitland did not pass on the proposal to his queen because Dudley was not even a peer, he was a nobody. This was something that Elizabeth said that she would rectify by giving Dudley an earldom. However, although Elizabeth’s ambassador to Scotland, Thomas Randolph, was ordered to keep on urging the Scottish queen to marry Dudley, neither Mary Queen of Scots or Robert Dudley were keen on the idea. In the Spring of 1564, when Randolph spoke to Mary of the idea, she was flabbergasted. She had been married to the King of France and here was Elizabeth trying to marry her off to a nobody. She did not say an outright “no” and demanded that if she were to marry Dudley then she should be named Elizabeth’s heir, but this was something that Elizabeth would never consider.

As we know, the marriage never took place and it is hard to know how serious Elizabeth was in her offer of Dudley to her nemesis, Mary Queen of Scots. Why on earth would she offer the man considered by many to be the love of her life to her enemy the Scottish Queen? In her book, “Elizabeth and Leicester: The Truth about the Virgin Queen and the Man She Loved”, Sarah Gristwood ponders the following possible reasons:-

I don’t think that Elizabeth had any intention of marrying Dudley off to Mary. She kept Mary busy with negotiations, managed to silence those who disapproved of her relationship with Dudley, showed Mary that she was willing to be amicable and showed Dudley that she was boss, bravo Elizabeth!

On the 29th September 1564, despite the fact that the marriage negotiations had gone pear-shaped, Elizabeth I made Robert Dudley Earl of Leicester. Gristwood explains that this earldom had “resonant history” because it had previously been held by royal princes like John of Gaunt and Henry of Bolingbroke (Henry IV). Although Dudley behaved impeccably at the ceremony, the Queen did not. As she put the chain of earldom around Dudley’s neck, Melville reported that she “could not refrain from putting her hand in his neck to kittle him smilingly.” A loving gesture and perhaps one that was meant to reassure Dudley that he was still hers.

17 thoughts on “Robert Dudley to Marry Mary Queen of Scots?”