Today is the anniversary of the death of Robert Dudley, Earl of Leicester. He died on 4th September 1588 at his lodge at Cornbury, near Woodstock in Oxfordshire.

Leicester had been suffering from a recurring stomach ailment and was actually on his way to Buxton to take the waters. Unfortunately, he never made it. He was taken ill at Cornbury and never left. The fifty-six year old Leicester left his wife, Lettice (née Knollys), and an illegitimate son, Robert, who he’d fathered with Lady Douglas Sheffield. Robert the Younger went on to become a famous explorer and cartographer.

Leicester was buried in the Beauchamp Chapel of the Collegiate Church of St Mary’s in Warwick, the same place as his son by Lettice, Robert Dudley, Lord Denbigh, who died in 1584 aged three. Lettice joined her husband in the chapel when she was buried in 1634. Leicester’s brother, Ambrose, is also buried in the chapel, and I found it a very moving experience visiting their resting places; they all have such beautiful monuments.

Here is a gallery of photos I took in the Beauchamp Chapel: 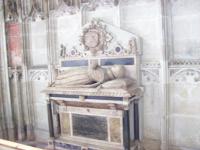 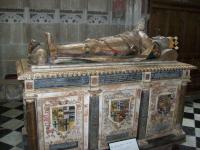 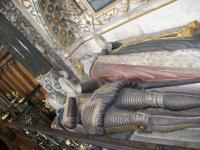 3 thoughts on “4 September 1588 – The Death of Robert Dudley, Earl of Leicester”